One of my former students from when I served on staff with InterVarsity, is a proud multi-racial Native American who has recently taken up the mantle of resistance at her children’s elementary school who uses R-dsk*ins as their school mascot. She frequently posts screenshots of the hateful & personal attacks other parents at the school launch at her as they inexplicably fight to keep this word as their mascot name.

The ensuing battle has been so intense the local news recently aired a few minutes of the community gathering in which the Board of Education disappointingly ruled to keep the mascot name.  During the video an older white gentleman stood at the microphone with anger & disgust & forcefully told my friend that anyone who didn’t like discrimination in this country can leave with his packing assistance. She replied, “we were here first, I’ll help you pack.” The irony of a descendant of an immigrant so foolish to utter those words to the descendant of an American native to this land.  My heart broke watching him say those words with such pride & hostility. My friend was ultimately booted from the meeting for being “too loud.” How dare she voice her opinion against a racial slur?

[If you don’t understand why using R-dsk*ns or other Native names, tribes & imagery as mascots is a huge, racially charged offense drop your guard & learn something. And until you learn something, understand something AND practice empathy KEEP YO MOUTH ALL THE WAY CLOSED].

After I saw the video, I wondered why white people, black people, Asian people or any non-Native people would spend time arguing and advocating for the use of Native tribes & imagery for their mascots aside from the inconvenience of change. I understand school pride. I even understand the “it’s always been this way,” mentality.  But when one considers the enormous damage done to Native peoples since North America was forcibly & cruelly stolen -by immigrants- why would anyone with half a heart refuse to hear the pain in using these destructive Mascot names? I would like some other answer besides the half-baked, “I’m not racist,” “we are not racist,” bullshit. That is simply not a good answer, when the use of these words & the subsequent fight to protect them is in fact, racist. And denies any responsibility to anyone to actually address the why. Why are these mascot names more important that actual people?

I realize I’m but grazing the surface of a huge issue brewing nationwide. The simplicity of it for me is this: Native-Americans are offended by the use of these names. After all the shit America has put them through & the continued horrible treatment & ongoing broken treaties — DITCH THE MASCOTS. And not just ditch them, but don’t argue & ditch them quickly. Because that is what decent, non-racist people do. I don’t care if your team has had that mascot for 1,000 years.  What is more important?

I am so proud of the work Monica is doing to address racism towards Native-Americans. She is a fierce & brave woman willing to walk in the muck of confronting racism.  In the past 15 or so years that I decided to take a decidedly anti-racism approach to my work, my writings & my life I’ve realized how much this journey is not only about courage but willingness. You have to be willing to absorb toxicity. If anything, the work is crippling and constantly threatens your daily emotional equilibrium. Restoration to a peace-filled or whole self can seem downright impossible. Which is why many who take up these causes see counselors & kill themselves & such.  Any bit of anti-racism work in America is TOUGH work. I’ve been on the front lines of it and I’ve seen the hurricane it can cause a person, a family, a community. I’ve watched folks around me drop off like flies trying to pull down systems & structures that keep the marginalized in a perpetual state of oppression. I myself has emotionally descended to the lowest depths as I’ve engaged anti-racism work.

The reason people do this work & the only reason I ever did  was because I believed in it like I believe in the invisible air I breathe. I also believe in the spiritual mandate as a Christian to pursue & seek reconciliation. I believe in the Biblical idea to establish shalom among global people groups & cultures. I believe in the worth of every human being in every tribe, tongue & nation. And I believe good people should fight for what they believe in. And also? I believe not doing this work when you ignore suffering around you makes you a sad, weak coward.

Nothing about anti-racism is fun. The work has been at times fulfilling. But more than anything, it’s been soul-crushingly painful. Butted up against being a strong empath, a Black woman in America, a lover of my people & justice…it’s a perfect storm. A storm I’ve almost drowned in more than once.

But along with my friend, I continue on, because I know what I believe in and I’d rather death come to me than compromise what I hold most dear and who God has called me to be: I am a fierce protector of the poor, the oppressed, emotionally or otherwise. Society’s sluts, hoes & thugs. The ones society looks at to declare “you have no worth,” “you have no home,” “you have no country,” you have no clean drinking water,” you have no rights,” “you have no safe place,””you have no money,” “you have no husband,” “you have no dignity,” those are the ones God loves & sees. These are who God calls his believers to love, to see, to value, to cherish & to advocate for. These people are typically all tangled up in anti-racism work…the giant cacophony of the American experiment. Sigh.

So we march on. You can warn us, you can give us an explanation but we WILL persist,  MoFoLo.

THANK YOU, Mitch McConnell this [email protected]$$ rallying cry: “She was warned. She was given an explanation. Nevertheless, she persisted.”

That’s the only way women have been able to get anything done in the first place. This is my womanly heritage & honor.

Come at me bro. I doggy dare you. 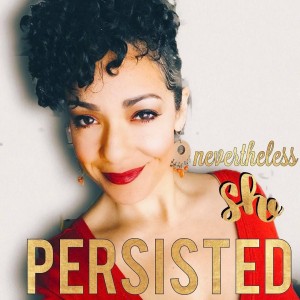